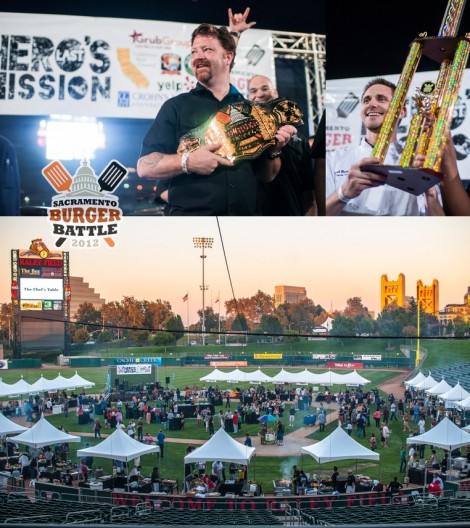 Sacramento, May 23, 2013 – Sacramento’s biggest burger cook-off event of the year is now open to entries. The 2013 Sacramento Burger Battle, coming to Raley Field on Wednesday, September 18, is accepting applications from area restaurants to compete at the second annual charity fundraiser and burger challenge.

Fifteen restaurants will be chosen from the entrants to present their best burgers at the event. The winner of the 2013 Sacramento Burger Battle will be chosen by a panel of judges and will receive the custom-made belt presented to last year’s victor, Chef’s Table of Rocklin, Calif. The winner will also represent Sacramento in the Burger Division at the World Food Championship in Las Vegas later this year. The People’s Choice award will be given to the competitor with the most votes by event guests.

Entries for competitors are being accepted until midnight, June 21, 2013 at http:// sacburgerbattle.com/compete/. Details on what potential competitors can expect at the event are available at the official Sacramento Burger Battle website. Battle participants will be selected and notified on or before June 30.

The inaugural event in September 2012 raised more than $27,000 for the Crohn’s and Colitis Foundation of America (CCFA) through ticket, merchandise, and raffle ticket sales.

Conceived by nationally ranked burger blogger and Sacramento resident Rodney Blackwell, the Sacramento Burger Battle is designed to showcase the local food and dining scene as well as raise money for CCFA. “Many of last year’s restaurants used locally sourced ingredients, so the Burger Battle is another great way for Sacramento to show why we are the Farm to Fork Capital,” says Blackwell.

Tickets for the 2013 Sacramento Burger Battle will go on sale July 1.